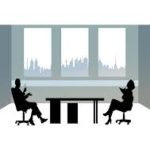 Every year we continue business in Louisiana is another opportunity to help local companies find office solutions that fit their team’s workflow and bottom line.

As a result, we have a diverse project gallery we’re proud of and want to highlight some of our recent projects.

Bruno & Tervalon LLP is a CPA firm based in New Orleans and is the largest minority-owned firm in the state. They’ve been in business for nearly four decades, making them a trusted name in the city.

They came to us wanting to update their headquarters by transforming their open workspace into a mixture of private offices and collaborative work areas.

We took some time to come up with a custom design that considered their desire to create private workspaces while maintaining collaborative common areas.

The result is an office that’s a great example of how a company can create a hybrid workspace with elements of traditional design and open concepts.

The rail system has always been an important part of our state’s commerce and transportation and that’s why we were proud to work with Amtrak to update their offices.

They came to us with a problem that many big companies face. Their technology was up-to-date, but their office design lagged behind.

Cramped cubicles and drab colors gave off an outdated impression and they wanted to change that. Amtrak wanted new and fresh, not old and worn.

We went in and overhauled their cubicles, management offices and common areas. We chose darker wood tones and black chairs for offices and meeting rooms and light, airy colors for open-area workspaces.

Through our creative use of modular furniture and systems cubicles, we were able to provide Amtrak the modern and efficient workspace they wanted.

Louisiana State University’s healthcare system was looking for a way to add more cabinet space to one of their eye care clinics.

Because they were working with a limited budget, they couldn’t go through with plans to have built-in cabinetry solutions.

Knowing how important it was for them to update their office with additional storage, we proposed a plan that scrapped the built-in option and added more storage space by implementing systems furniture of varying heights.

However, finding a budget-appropriate solution was just part of what would make this job successful.

Because the office was a hub for necessary eye care and medical procedures, it was important to management that there wasn’t any down time or temporary workspaces that made patient care and processing more difficult.

Thankfully, we were able to provide them a comprehensive plan that included a weekend install that didn’t interfere with normal operations.

The music department was building a new classroom and had some unique requirements. Each workspace needed to be ultra-functional, a space for a sound board, monitor and other sound equipment.

At the same time, the workspaces needed to be in line with modern music classroom design.

We came up with a solution that provided plenty of functional desktop space and enough room for two chairs.

We Work With You From Beginning to End

We’re proud of the projects we’ve mentioned in this post because they reflect our dedication to work with our clients from beginning to end to come up with a solution that meets their functional needs and their budget.

Our workflow starts with a consultation that includes a free space planning session. During these interactions, we lay the groundwork for a smooth installation process.

From there, we move to a more detailed analysis of how our initial planning sessions meet your needs and what should be modified to create a workspace you’ll love.

With plans finalized and decisions made, we move into the project management phase by working with you to get the best prices on furniture and cubicles, as well as finding reliable vendors who help us get the job done on-time.

If you want to learn more about who we are, head to our About Us page to learn about our team. Our president, Jerry Maxwell, has led our company since 1995 and VP Peggy Maxwell has been with us since 1979.

You can learn a lot about a leader by the books they read.

Many of the country’s top CEOs are voracious readers and occasionally they reveal their favorite reads. The beauty of this type of learning is that there is no secret – you or I can pick up the same books they read.

In this post, we’ll talk about four different books recommended by a well-known business leader or CEO.

“The Innovator’s Dilemma: The Revolutionary Book That Will Change the Way You Do Business” by Clayton M. Christensen

Whenever a company finds success, it can be hard to switch things up, especially if you’re doing everything right. But, there comes a point where profit, Harvard’s Christensen says, can choke out the innovative sparks that lead to the long-term success you want.

“The best professional managers — doing all the right things and following all the best advice — lead their companies all the way to the top of their markets in that pursuit… only to fall straight off the edge of a cliff after getting there,” the Harvard Business Review wrote.

Steve Jobs loved Christensen’s book. The HBR says some of that adoration stems from the fact that when Jobs was removed as the CEO of Apple, his replacement, John Sculley, focused more on profit than on passion.

“My passion has been to build an enduring company where people were motivated to make great products. The products, not the profits, were the motivation,” Jobs was quoted as saying in the HBR article. “Sculley flipped these priorities to where the goal was to make money. It’s a subtle difference, but it ends up meaning everything.”

Two legendary business leaders say this book is a powerful tome: Bill Gates and Warren Buffet. In fact, according to Inc., it was Buffet who recommended the book to Gates.

But be forewarned, Gates said in a 2016 CNBC article, this book isn’t a bite-sized compilation of bullet points meant to vault your company into massive success.

Quite the opposite, actually. Brooks, a former reporter at The New Yorker, digs into his stories and generates compelling narratives meant to instruct through example.

“Unlike a lot of today’s business writers, Brooks didn’t boil his work down into pat how-to lessons or simplistic explanations for success,” Gates told CNBC. “You won’t find any listicles in his work. Brooks wrote long articles that frame an issue, explore it in depth, introduce a few compelling characters, and show how things went for them.”

“The Checklist Manifesto: How to Get Things Right” by Atul Gawande

This book is a favorite of Jack Dorsey, the man behind Twitter and Square.

According to Business Insider, Dorsey quotes the book often and, at the time, included it in a welcome kit for all new hires at Square.

One of his favorites? A Gawande quote about venture capitalists choosing the right startups, BI says:

“One needs a person who can take an idea from proposal to reality, work the long hours, build a team, handle the pressures and setbacks, manage technical and people problems alike, and stick with the effort for years on end without getting distracted or going insane. Such people are rare and extremely hard to spot.”

Gawande, a surgeon, wrote the book because, as Inc. points out, he believes “clearly written guides and checklists are required for completing complex tasks to the best of your ability.”

Feel like you need a solid system to help you get through the day? “The Checklist Manifesto” could be exactly what you need.

Wrapping It Up: A Few Final Thoughts

Reading these books won’t guarantee your business or professional life will magically elevate itself.

While each individual book may provide you practical ways to manage one part of your life, making reading a consistent practice in your life is what will, most likely, create the change you seek.

If you’d like a longer list of CEO’s favorite books, look at this Inc. article called “25 Books Jeff Bezos, Mark Zuckerberg, and Other Top CEOs Recommend.”