Executive furniture says a lot about the leadership of your business.

Big, commanding desks that create space between the executive and the guest or employee indicates a power move, while an office with a normal-sized desk and a sitting area is a little more friendly.

It’s hard, though, to pin down a person or company by the type of desk they have because there could be complete surprises as it relates to the person in power and their workspace. 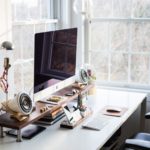 Being the followers of office trends and executive desks that we are, we looked at an article from Business Insider that highlighted the desks of 39 well-known business execs and entrepreneurs. Some of what we saw surprised us.

In this post, we’re going to highlight some of the more interesting things we noticed in this article.

The first photo we looked at was of Arianna Huffington’s office. Now, we’d expect the editor-in-chief of a Pulitzer-winning publication would have a somewhat roomy office, but that’s not what we found.

Huffington’s workplace is a cramped alcove with two bookshelves, at least 100 books, a small sitting area and a modest desk you’d expect to find at an antique store.

On top of that, her office has a wall-to-wall window through which everyone can see her. Curtains add some privacy, but they were drawn back in the photo we saw.

“It’s all about transparency,” Huffington told Business Insider. “I can see out, and everyone can see in.”

If Arianna Huffington’s desk is small, then Sequoia Capital’s Michael Mortiz’s workspace is microscopic. Moritz’s desk is sparse. The venture capital guru’s desk is home to a Mac laptop, an iMac desktop, chocolate, a shot bottle of whiskey, a bottle of Pellegrino and a pair of analog clocks.

His desk is one among many desks in one room – a corner office seems to be out of the question.

What surprises us most about this is fact that Moritz’s simple desk belies the billions of dollars the company has made from investments in Apple, Google, Yahoo and LinkedIn.

Here’s an apt description of the company’s offices, via Forbes contributor George Anders.

“Sequoia doesn’t display its heritage with the well-heeled pride you might find at other top-tier venture firms, let alone the likes of JPMorgan or KKR … Sequoia partners don’t enjoy luxurious private offices; instead, they toil at stand-up desks in a big open hall. Conference rooms are adorned with cheap plastic wastebaskets. It’s as if Sequoia’s partners haven’t fully realized that they might be rich.”

Adler’s company has virtual employees all around the country, so he doesn’t like to head to the office because, in his words, “it’s boring and there’s no one to talk with.”

So, Adler works from his home office, which is comprised of a standing desk with a view of his backyard.

Adler told Business Insider he doesn’t get any work done when he’s looking at the ocean from his home, which is why he chooses to work with a backyard view.

Hurst, like Huffington, has his own office separate from other employees.

However, he’s chosen to break down the walls, so to speak, with a floor-to-ceiling glass wall that allows him to “feel connected to the dynamic and brilliant team at Taproot while providing the sound privacy unfortunately required. My team is amazing and watching them work gives me tremendous energy.”

This is the same type of response that Huffington gave – transparency and a lack of barriers are important to executives.

Hurst’s office also includes a bookshelf, a floor-to-ceiling mirror and a small sitting area along with a metal desk that’s home to a lamp and two monitors.

Variety is the Common Theme for Executive Desks

As you’ve probably gathered, there really is no right or wrong desk for an executive. In these examples, the magnitude of the business and/or the power of the person didn’t really influence the size of their desk.

In fact, there was an inverse effect. Arguably the most valuable person on the list, Michael Moritz, had the simplest work desk: uncluttered, clean and underwhelming.

We’re aware of how executive desks have changed and our inventory reflects that. Stop by our Executive Furniture page to learn more about what we offer.

Expert Tips for Productivity You Can Use Today: Part Two
How Can You Use Corner Desks in the Office?
Organization Apps