The Office Planning Group Blog > Uncategorized > QWERTY, Dvorak and KALQ: The History of Keyboards and the Legends Surrounding the Original

QWERTY, Dvorak and KALQ: The History of Keyboards and the Legends Surrounding the Original

This past week BlackBerry CEO John Chen finally announced the news that he’d been hinting at for some time. Chen said the company will no longer develop QWERTY keyboard hardware for its phone.

So long, small plastic keys. A moment of silence, please.

By joining the rest of the touch-screen keyboard world, BlackBerry’s announcement brought into focus the QWERTY keyboard. And that got us thinking: How did QWERTY come about? Who invented it? Are there competitors?

To us, it seems so peculiar that one keyboard design would dominate typewriter, computer and mobile keyboards for as long as keyboards have been around.

Christopher Latham Sholes. Sound familiar? If it doesn’t you, aren’t alone. The inventor’s name isn’t nearly as famous as his invention – the first typewriter and its QWERTY keyboard. According to Encyclopedia Britannica, Sholes was an editor at several newspapers in Wisconsin before Abraham Lincoln hired him for a federal position at the Port of Milwaukee.

The government job allowed Sholes tons of free time, which he devoted to various inventions. His focus settled on his best project: a writing machine.

Sholes, along with two colleagues, won a patent for the typewriter in 1868. Like many startups, he was struggling for cash flow. So, four years later he sold his patent rights to the Remington Arms Company, who helped the typewriter flourish.

Sholes Chose the QWERTY Layout to Prevent Typewriter Jamming…Or Did He?

The history books are certain that Sholes was the creator of the typewriter. However, the trail goes a bit cold when experts try and pin down exactly why Sholes designed the QWERTY keyboard.

According to Smithsonian magazine, Sholes found that when common letters were placed next to each other, typewriters were jammed because keys were hit in succession too quickly. The “type bars” connecting keys to letters would get tangled up.

So, he separated popular letters to prevent any problems.

“The type bars connecting the key and the letter plate hung in a cycle beneath the paper. If a user quickly typed a succession of letters whose type bars were near each other, the delicate machinery would get jammed.” the Smithsonian wrote in a Fact or Fiction post on their site. “So, it is said, Sholes redesigned the arrangement to separate the most common sequences of letters like ‘th’ or ‘he’.”

Below is a photo of Sholes’ drawings of the first QWERTY keyboard, courtesy of Google Patents. These drawings were submitted for the QWERTY patent and were approved. 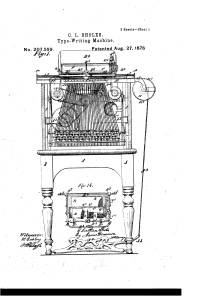 As tidy as this story sounds, it didn’t add up for a pair of researchers from Kyoto University.

They argue that Sholes didn’t invent the QWERTY keyboard to prevent jamming. They say the machine’s early adopters, Morse code technicians, needed a keyboard layout that allowed them the fastest possible typing speeds so they could keep up with the Morse messenger on the other end of the line. So, Sholes designed QWERTY to meet that need.

Here’s what the Japanese researchers wrote: “If Sholes really arranged the keyboard to slow down the operator, the operator became unable to catch up (to) the Morse sender. We don’t believe that Sholes had such a nonsense intention during his development of (the) Type-Writer.”

We doubt historians and QWERTY enthusiasts will ever dig up the true story behind the origins of the QWERTY design. However, that narrative could become obsolete if another keyboard layout takes over.

For several decades the QWERTY design faced no legitimate challengers to the typewriting throne. However, a doctor named August Dvorak created a new layout in the 1930’s.

This new layout featured all vowels in the middle line of the keyboard, replacing the current position of the A, S, D, F and G keys.

The popular consonants R, S, T, L and N are located on the right side of the keyboard where the P, O, colon/semi-colon, L and K keys are.

The Smithsonian says early proponents of the Dvorak claimed that the keyboard was faster, but the evidence on the claim is thin and the Dvorak design never gained much traction.

More recently, the KALQ keyboard has been rumored to be the future keyboard for thumb-oriented mobile users. The keyboard takes about 8 hours to learn, and users can surpass their QWERTY typing speed in as little as 12-13 hours, a Tech Crunch article reported in 2014.

Want to give it a try? You can download the KALQ

Upgrading Your Company Image With Used Office Furniture
What to Expect When You’re Expecting to Start a Business: Dealing With Growth
Choosing the Right Furniture for your New Orleans Office