The Office Planning Group Blog > Office Culture > The History of Management: From Individual to Machine to Empathy

The History of Management: From Individual to Machine to Empathy

Unless you’ve been travelling through Southeast Asia for the past five years without a smartphone, then you’ve probably noticed that management styles have undergone some significant changes.

For years, the top-down model ruled just about every kind of organization in the country. There was a boss, some mid-level management and a bunch of employees. The boss gave the directive, the managers passed it on to the employees and everything was great.

As Millennials flooded the workforce, those age-old notions of proper management started to crumble. The model’s viability was questioned and new ideas of community-style learning and leading emerged. The Strategic Leadership Institute (SLI) calls this the “Servant Leader” model.

This significant change got us thinking about the history of management and how it’s changed not just over the past decade, but over the past few centuries.

Entrepreneurs are basically the rock stars of today’s business world. However, this trend is nothing new.  Back in the 19th century, business owners were bootstrapping their way to success just like they are today.

This movement was called “entrepreneurial capitalism,” SLI pointed out in a 2009 article on the history of management. Individuals used their own money to start their businesses.

The Harvard Business Review has a nice explanation of this managerial movement:

“Prior to the industrial revolution, of course, there wasn’t much ‘management’ at all – meaning, anyone other than the owner of an enterprise handling tasks such as coordination, planning, controlling, rewarding, and resource allocation.”

However, when the 20th century rolled around, those self-funded companies started to grow. The Industrial Revolution brought with it massive companies who couldn’t operate under the principles of entrepreneurial capitalism. So, they adopted a new style of management called “managerial capitalism” to corral and transform their large workforces.

As American shifted to this new style of management, various experts began to study the manufacturing process. Through their work, managers were able to understand how long it took to manufacture a certain product and what type of efficiency they could expect out of a single employee.

The 20th century brought not only the boom of managerial capitalism, but also a scientific approach to management that mirrored the prevailing modernist mindset of the first half of the 1900’s.

An article by Rita McGrath in the Harvard Business Review calls this the era of “expertise,” in which “writers such as Elton Mayo, Mary Parker Follett, Chester Barnard, Max Weber, and Chris Argyris imported theories from other fields (sociology and psychology) to apply to management. Statistical and mathematical insights were imported (often from military uses) forming the basis of the field that would subsequently be known as operations management.”

Organizations basically became well-oiled machines operating on scientific theories of efficiency and structure. A worker’s value was based on how well he or should could perform his or her role within the overall machine.

But that concept of leadership and management started to change when author Peter Drucker started to question a mechanical approach to leadership. Workers were more than just robots playing a small part in a huge machine – they were a wealth of knowledge that helped the company survive.

A Shift from Robotic to Relational: Employees as Knowledge-Holders

“When all the value in an organization walks out the door each evening, a different managerial contract than the command-and-control mindset prevalent in execution type work is required,” Harvard Business Review pointed out. “Thus, new theories of management arose that put far more emphasis on motivation and engagement of workers.” 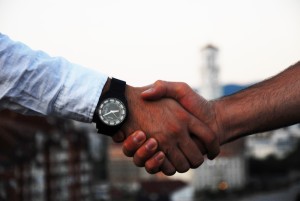 So, instead of bosses ordering a legion of mindless robots to do menial tasks, managers started to realize that employees were assets for their knowledge just as much as their ability to perform a task.

Elton Mayo, one of the authors mentioned earlier, was one of the influencers of a new movement of management. This new movement put an emphasis on social interactions in the workplace and an appeal to the emotions of employees as the primary determining factor in efficiency, SLI noted in its article

You could say that Mayo, along with other proponents of a more human managerial system, created the platform by which today’s employee-focused managerial style found its growth. McGrath calls this the “era of empathy,” while SLI dubbed it the era of “servant leadership.”

We think McGrath’s words are pretty fitting to conclude this brief history of management:

“We are also grappling with widespread dissatisfaction with the institutions that have been built to date, many of which were designed for the business-as-machine era. They are seen as promoting inequality, pursuing profit at the expense of employees and customers, and being run for the benefit of owners of capital, rather than for a broader set of stakeholders. At this level, too, the challenge to management is to act with greater empathy.”

Leveraging the New Year for Workplace Success: Part 1
Three Workplace Myths You’ve Probably Believed at Least Once in Your Life
How to Navigate a Career Change: Tips from Professionals Who’ve Been There Before